Saturday July 7 marked day 50 of the Olympic Torch Relay and Fishpools had a front row seat to this historic event as the Torch was carried through Waltham Cross right past our lovely store. 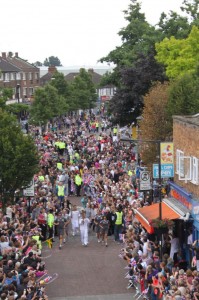 Crowds lined the streets to watch as the torch made its way across 145 miles through 14 communities including Harlow, Waltham Abbey, Waltham Cross, Hertford as it made its way from Chelmsford to Cambridge, and we were there to capture the action!

Fishpools staff managed to snatch a few quick pics and even a short film of one of the torch bearers, 34 year old Russell Taylor from Hornchurch carried the torch past the Fishpools store.

There was lots to see and do as the flame was carried on its journey. The torch arrived at the Lee Valley White Water Centre, the London 2012 venue for Canoe Slalom at 8.50 and continued its route carried by Zachary Frankin, an athlete on the Lloyds TSB Local Heroes programme.

But Zach was just one of the 117 torchbearers who carried the Flame from Chelmsford to Cambridge, including Jamie Oliver and Olympian Iwan Thomas.

The day culminated in evening celebrations at Parker’s Piece, Cambridge.